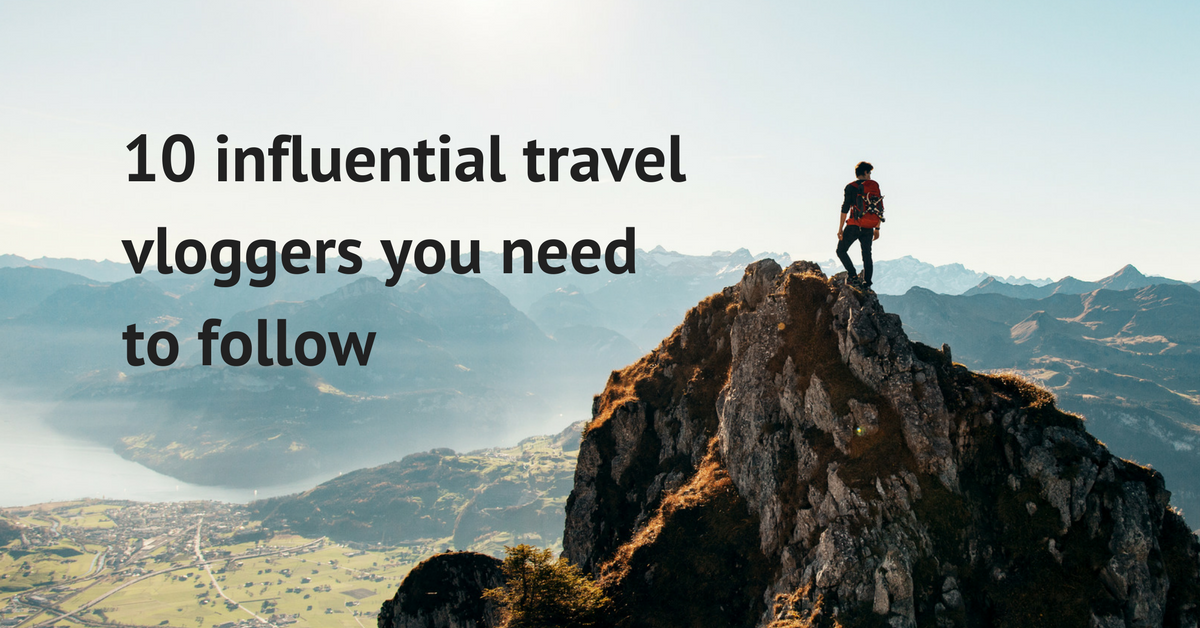 “A camera in hand and an idea in mind”. This famous phrase was the mantra of the groundbreaking filmmakers who gave birth to the Nouvelle Vague and New Cinema movement. It can also apply to travel vloggers who influence people around the world to live, document and share their lives on the road.

With a camera in hand, a destination in the head and a backpack full of essential gadgets, they transform their experiences around the world into entertainment programs never seen before.   Living a life of adventure and enthusiasm is not for everyone. Giving up family, comfort and friends can become a burden along the way.

However, getting to know new cultures, learning from complicated situations, clearing unknown paths and making friends of different nationalities makes it all worthwhile. This is what we have learned by following these digital influencers who create original, dynamic and entertaining content that has invaded Youtube and other digital platforms.

Here’s a list of the best and most promising travel vloggers for you to start following right now. Regardless of the number of subscribers in their channels, each one selected for this list has a unique and special feature, making them all worth your time. Get inspired, follow, and schedule your next destination today.

Louis Cole is a daily vlogger who has appeared on pages like Buzzfeed for his nonstop life on the road. He has already run the world in search of adventure and new experiences, forming a community of people who wish to follow in his footsteps through the site: https://livetheadventure.club/

Louis is considered the master of daily vlog, his smart use of cameras and gadgets, his speed in editing videos (even in unfavorable conditions) and travels for charitable causes. He has traveled to India with a group of Youtubers to raise awareness and funds for the Teenager Cancer Trust (https://www.givey.com/louis) and made trips to Africa raising awareness about the problems that occur on the continent.

What makes a world champion kayaker leave everything behind and start a life on the road? The quest for more adventure, of course! Ben Brown documents his travels focusing on the pursuit of extreme sports, motovlogging around the world and making cinematic images that are breathtaking. Whether he is in freezing landscapes or dusty deserts, the masterful use of cameras and the flawless use of photography in his videos are worth the subscription to his channel.

Devin Graham is an outstanding videographer who pushes the boundaries in every visual project. His diverse viral videos blend fantasy and reality, putting together extreme sports and fascinating images. From super high quality, adrenaline and entertaining, Devin documents his travels around the world skateboarding, bungee jumping and jumping from mountains in the most diverse places on the planet. You never know what will become of him in the next video, but you know he’ll surprise and inspire you to live a life of more adventures.   Trailer:

Californian brothers Marko and Alex Ayling have a mission during their travels: exploring cities in the company of local people. They won a contest in 2013 and earned £50,000 to travel for six months on six continents, documenting their experiences. They are on the White House’s top 100 travel vloggers list and are considered one of the most influential travel channels in the world.   Trailer:

Quick and simple tips on the most diverse countries in the world are what you will find with Youtuber David Hoffmann. If you want to know more about the curiosity of some countries you are thinking about traveling, look for the hundreds of videos on David’s channel because David’s probably been there.   Trailer:

Leave everything behind and live a life filled with passion, substance and adventure. That is the goal of Gareth Leonard. The Youtuber travels the world in search of living local experiences and meeting authentic people in every corner he passes. In addition to the charity projects he performs, he also shares hilarious music videos from each country that he lives for a few months.

In love with the underwater world, Mike Corey travels the world in search of the most fascinating views that his camera can achieve. A break-dancing marine biologist turned travel vlogger. He captures the world with a curiosity that comes from never really having grown up. His priorities are clear: experiences over possessions.

A Venezuelan who started her career on YouTube with language-learning videos and is now part of a large group of travel vloggers influencers. She always searches for the secret code of the destination and shares her discoveries in every video. Travel and entertainment tips around the world are the most striking features of her channel. Check out this well-produced channel through Sonia’s eyes.

Addicted to adventure travel and photography, Matthew Karsten is always on the mission for his next big destination, sharing stories, beautiful pictures and useful travel tips. Around the world he shows his activities such as deep-water solo rock climbing, scuba diving, downhill biking, river surfing and last but not least beautiful scenery footage.

The channel owners are two penniless friends who travel around the world and show you how you can do that too. Damon is American and Joana is a Brazilian who lives in the United States since she was a child, so she speaks English as if she was born there. They have several language videos, either with Jo teaching Damon to speak Portuguese or both learning a different language. They show you how to travel cheaply, how to do couchsurfing and everything you need to know to travel on a low budget.

Live an adventure. Not being a tourist, but a global citizen. This is the biggest goal of these 10 travel channels that are making history on Youtube. How will you live your adventure? Let yourself be influenced by these travel storytellers and book your next trip as soon as possible.